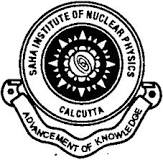 Saha Institute of Nuclear Physics has a governing council chaired by the Chairman of the Atomic Energy Commission, India (and Secretary, DAE, Govt. of India). The other members comprise of three scientists nominated by the DAE, two representatives of the DAE, two nominees of Calcutta University, one nominee of Govt. of West Bengal and the Director of the Institute.

Saha Institute of Nuclear Physics has approximately 125 faculty members, 20 post-doctoral fellows and 80 graduate students. The University of Calcutta acknowledges it as a Centre for conducting research for doctoral degrees and providing facilities for teaching and research in Physical and Biological Sciences.

The administrative control of the institute with the Department of Atomic Energy (DAE), Government of India, according to an agreement entered with the institute in 1992.

Admission to various programs in Saha Institute of Nuclear Physics is given below:

Saha Institute of Nuclear Physics Undergraduate Associateship : The undergraduate associate ship can be undertaken only by those who are pursuing undergraduate studies (B. Sc/Integrated M. Sc in Physics/Chemistry/Biological Sciences) and who have secured at least 75% in aggregate in Class XII Board Examination. The final selection is made on the basis of an interview.

Saha Institute of Nuclear Physics Ph. D program : To seek admission in a Ph.D program, a candidate has to clear the One-Year Post-M.Sc. Associateship Course, after which an interview is conducted and admission is granted to the candidate.

The CSIR-NET qualified candidates are given admission on the basis of an interview.

Saha Institute of Nuclear Physics Summer Program : The program is open for students pursuing first year of M.Sc. or to those who have completed B. Tech. with excellent academic records in Physics/Biophysical Sciences. A B. Sc. Degree holder in the relevant field or who has completed at least 3 years of a 5 year integrated M. Sc. Course is also eligible to apply for the program. Only those candidates whose academic interests overlap with areas being pursued in SINP will be considered.

Saha Institute of Nuclear Physics Post-M SC Associateship Course : A candidate is selected in this course on the basis of academic records and on the marks scored in the JRF entrance examination followed by a personal interview. Only those candidates are eligible to apply who have completed their Masters degree in appropriate subjects from a recognized university or are appearing for their final exams.

The students selected to the course are given the designation of Junior Research Fellows (JRF) of the Institute. They are provided a stipend of Rs. 8,000 per month along with the Medical Benefits (as admissible) & HRA/In-house hostel facilities. An annual book grant of Rs. 3000 is also provided to them.

Saha Institute of Nuclear Physics SINP IS located in Kolkata.