The candidate shall undertake research work, in connection with any of the aspects of technology relevant to the course selected in the Fourth semester (full-time course) and sixth semester ( part-time course). Before submitting the dissertation, the candidate shall present a pre-submission seminar on his/her work. The candidate is supposed to submit three typed or printed copies of the dissertation written by him/her to the university through the Director/Principal of the college. 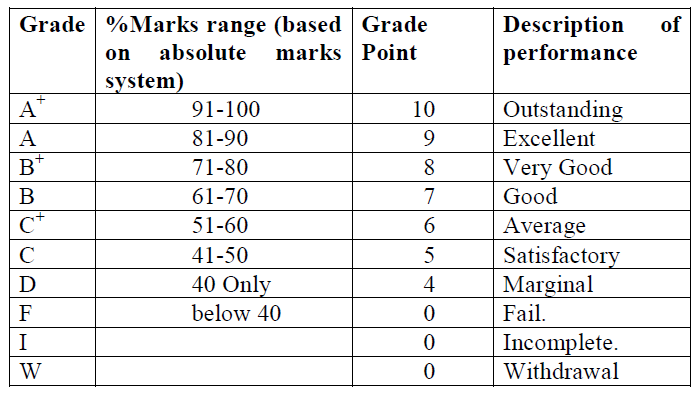 RGPV Semester Grade Points Average (SGPA) shall be calculated as under:-

RGPV Cumulative Grade Point Average (CGPA) shall be calculated as under:-

Following are the  promotion rule of  postgraduate program ME Mtech M Arch:

RGPV shall award One grace mark to the candidate who is either failing in any semester or missing distinction/ first division by one mark,  in the M.E./ M.TECH./ M.Arch. examination.

Division or Class shall be awarded only after the fourth (sixth for part time course) and final semester examination based on the total performance of the candidate for all the two(three for part-time course) years as given below:

Candidates should have a minimum attendance of 75% of lecturers delivered and of the practicals held, separately in each paper.  A shortfall in attendance up to 10% and 5% on valid reasons can be condoned by the Director/Principal of the College and Vice-Chancellor of Rajiv Gandhi Proudyogiki Vishwavidyalaya, respectively.

Above rules are subject to change from time to time.