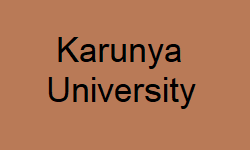 Karunya University GPA, SGPA, CGPA details applicable from the year 2013 is given below:

Each course shall be assigned a credit rating as given below:

Each letter grade is assigned a number from 1 to 10 which is known as grade point.

The ranking of a student in a semester will depend on the GP earned by him/her.

SGPA (The Semester Grade Point Average): It is the GPA of a student for the subjects registered in a semester.

CGPA (The Cumulative Grade Point Average): It is the GPA for all subjects successfully completed by a student at any stage.

The GPA, SGPA and CGPA are rounded off to two decimal places.

Karunya University (KU) calculation of percentage of marks from GPA

ii) FIRST Class: A student is awarded FIRST Class if the student has passed all the subjects within the allowed period by taking not more than two attempts after the stipulated period.The student has scored more than 6.0 CGPA on a 10 point grade.

iii) Second class: All the other students who qualify for the degree are given second class.